A couple of days ago I was fortunate to be out on the Derby marsh, camera and tripod in hand, when the fiercest storm I’ve seen up here ripped through overhead. In some respects there is a huge element of luck in play to capture a special landscape photograph, but planning and persistence can also pay dividends.

If you’ve followed my uploads recently, you may have noticed a suspicious number of dramatic clouds and storms creeping into my portfolio. In the Kimberley at this time of the year, most of the roads between towns are flooded, and access the beautiful surrounding gorges is very limited. This means I’ve been restricted to roaming around Derby. Derby is a small town which honestly can be covered in 15 minutes, so 3 months is ample time to get to know it well. It’s charming, but not overly photogenic, so I’ve turned my attention to the sky instead.

The day before yesterday, I was out on the marsh 45 minutes before sunset, and things weren’t looking great. The sky was overcast and flat, the clouds grey and lifeless. The wind was blowing strongly, so I thought some motion in the grass would be interesting. 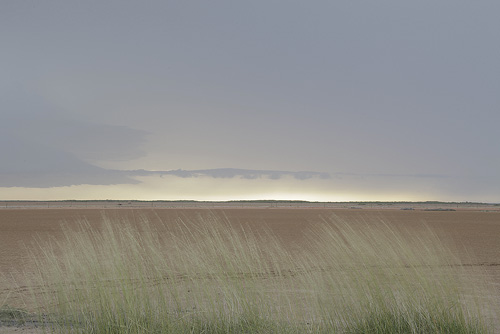 A valiant attempt, but not really working out. I walked out onto the mudflat which was surprisingly firm given it had been raining in recent days. The patterns in the cracked mud were great. There were some deep footprints left from an excited and probably very muddy dog which could add a little foreground interest, so I experimented with some compositions. 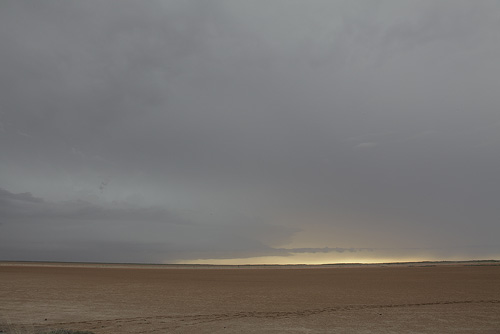 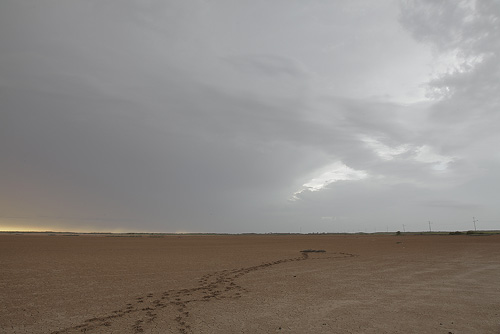 Eventually I found one that could possibly work. The sky was still pretty grey, but some definition was forming in the sky. I was intrigued by the sliver of sun which peeked out under the oppressive weight of cloud. A couple of minutes later, the sun approached the horizon, and things started to get interesting. The sky turned a fascinating blue-green. A storm front materialised and started heading in my direction! I rushed back to my previous composition. Flashes of lightning started hitting the ground. The storm was approaching rapidly. I wanted to capture some lightning, but my lightning trigger didn’t seem to trip the shutter fast enough. In desperation, I fired off frames continuously.

As it got darker, the colours became even more vivid. I wanted to keep shooting, to capture a lightning bolt marking a special moment in time where everything comes together: the storm front perfectly timed with the sunset. However it wasn’t to be. Eventually I figured it wasn’t smart to place myself as the only object taller than half a metre on the flat marsh, and hurried back to the car. Still, I’m quite pleased with the captures. The moral? If you’re facing a boring sunset, be persistent and stay out there, as you never know when you’ll get lucky!