In the age of digital photography, the use of creative filters has somewhat diminished as many of the desired effects can now be duplicated in photoshop. However one filter that has not been made redundant by the digital darkroom is the polarizing filter.

A polarizer is often the first filter recommended to a new photographer who is interested in taking up landscape photography. It’s a versatile tool that can add punch to almost any landscape scene, and some professional photographers even leave them permanently attached to their lenses.

There are quite a few articles around describing the effect on an image that polarizers may have, however the best way to make effective use of your photographic tools is to have a grasp on how they work. Hopefully this guide will give some insight into the optics and application of this filter. By the end of this tutorial you’ll understand why this is one of the few photographic filters that cannot be duplicated in photoshop.

Light is unique in that two theories are needed to explain its behaviour – particles and waves.

The particle theory of light encompasses the notion that a beam of light is made up of little packets of energy travelling through the air called photons. This seemed to explain shadows, as the photons are blocked by an intervening object. Each photon can also transfer energy (or react with the digital sensor).

However certain phenomena cannot be explained by the particle theory: 1) light can also interact with other rays 2) bend around corners and 3) spread out when shone through a small aperture (diffraction). Waves however, do maintain these properties; some other real world examples include ocean waves and sound waves.

With regards to polarizers, we’re more interested in light as a wave and it’s important to understand how this would appear physically.

If we took a straight beam of non-polarized light and viewed it side-on, the wave would look something like below: 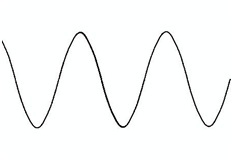 This wave can be simulated in reality if you grab a skipping rope and wave it up and down while the other end is held still by someone else.

However keep in mind if this were a ray of light, it’s not a simple sine wave depicted in two dimensions. If we then cut it in half, and looked at it end-on, there would be more waves vibrating in every possible angle. 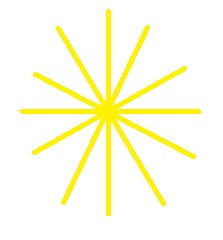 For simplicity’s sake, I have only shown the oscillation in six meridians, but there would be many more waves distributed in between these. If this were a real beam of light, it would be travelling perpendicular to your computer screen (towards you).

A polarizing substance only transmits light rays vibrating in one plane, and stops the rest. Think of it physically as a picket fence, or a set of jail bars.

What would happen if you put this in front of our ray of non-polarized light from before? 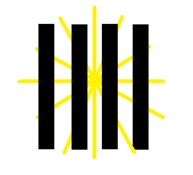 You can see that the horizontally aligned rays won’t fit through the screen (they’ll hit the sides), but the vertical rays will be able to slip through. Be mindful that in reality, many light rays will be heading towards you, right next to each other (I have only drawn one). Therefore, the resulting polarized light will look something like this:

The light rays will be only vibrating in one plane (vertical) and will be parallel to each other; everything else filtered out. This is polarization. You will still see the object through the filter as the newly polarized light is allowed to pass, however you’ll lose a bit of brightness as you’re getting rid of the rays that can’t slip through the gaps (accounting for the 1 1/3 stop loss that many filters advertise).

Polarizing filters can be rotated, which rotates the orientation of the picket fence, and the idea is to give us control over which orientation of light rays are allowed through to the camera sensor.

The main uses of polarizing filters in photography are to reduce reflections, and deepen blue skies. Next we’ll look at how these effects are achieved.

When light hits any object three things can happen. It either passes through (transmission), is absorbed (which may gives us different perception of colour, or how bright an object is) or bounces back (reflection). Light will do all three in different ratios depending on the properties of the object. Glass appears clear as it transmits most light, but it still reflects a small proportion. Metals are usually highly reflective, and light bouncing off such a surface may appear as below.

It’s important to note that reflected light is also polarized! If we looked at the ray end-on, after it has reflected it would look like this:

Unwanted reflections interfere with the object behind that we are actually interested in, reducing colour and contrast. It makes sense that if we oriented the picket fence of our polarizer vertically, it will screen out these polarized horizontal rays, and completely suppress the reflections (unlike the previous example where we put the filter in front of unpolarized light – in that case, since vertical rays were getting through, we’d still see the object, just a bit darker.)

In addition to this, if we wanted to let the reflections show up on the photo, we could rotate the polarizer so the slits were horizontal and would therefore have minimal effect. 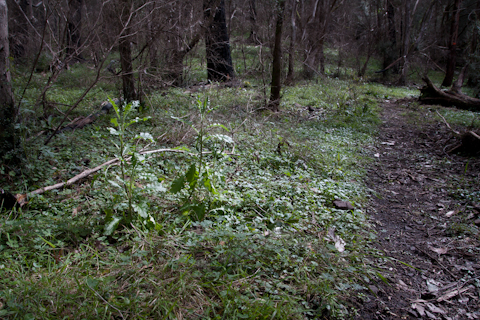 Image taken with polarizer set for minimal effect (no post processing). Light filtering from the canopy above is reflecting off the leaves of the underbrush, showing up white spots everywhere. This has the effect of reducing the contrast of the leaves, turning them an ugly pale green. 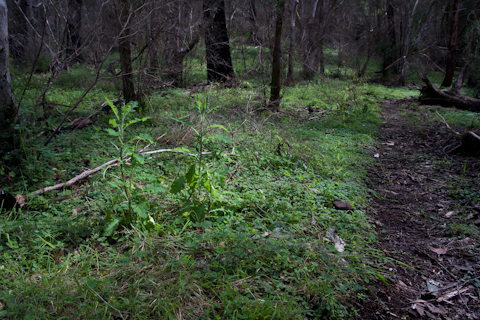 Image taken with polarizer set for maximum effect (no post processing). The reflections have largely been filtered out by the polarizer, allowing the natural colour of the leaves to come through with better colour and contrast.

As an exercise, grab a polarizing filter and put it between your eye and the monitor. Notice how you can turn the filter completely black in a certain orientation – this is because the output from your monitor is polarized!

Polarized driving glasses use this principle to screen out glare from the sun reflecting on the road, and therefore aid vision.

A lot of the time we can’t see through a lake as the light reflected off the surface means it is essentially acting like a mirror and we see the sky instead of the rocks or fish underneath. If we get rid of the intervening reflections, then the water will become transparent, and we can see straight through. 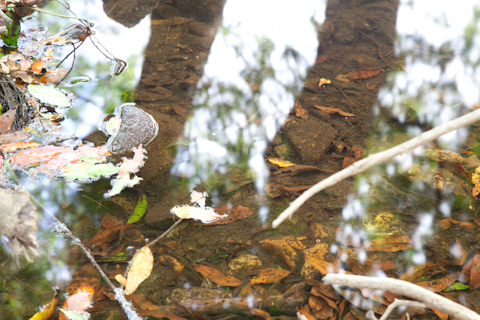 Unpolarized. The water surface is reflecting the sky above, obscuring details underneath. 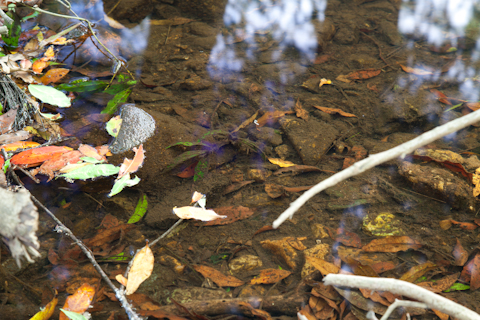 Polarizer set to max. Reflections have been minimized, and the creek bed underneath can be seen.

Polarizers for the Sky

White light is a mixture of all the visible wavelengths of light: red, orange, yellow, green, blue, indigo, violet (longer to shorter wavelengths).

Light from the sun is not polarized, and contains all of these wavelengths. As the light travels down towards us, it must pass through the earth’s atmosphere which contains particles. Rays of light which hit these particles are scattered (bounced off in a random direction).

Scatter is another method of polarization, and the effect is strongest at 90 degrees to the direction of the sun.

The sky appears blue as the shorter wavelengths of light (blue) are scattered more by the atmosphere (Rayleigh scattering) than longer wavelengths (red). By the time blue light reaches our eye, it is likely to have scattered multiple times, which means that at this time, it is less polarized than other colours.

So if we put a polarizing filter up at 90 degrees to the sun, we are not really screening out the blue wavelengths as it isn’t polarized. However we are removing the accompanying polarized light (which serves to wash out the colour), thus leaving blue by itself so it appears deeper and more saturated. 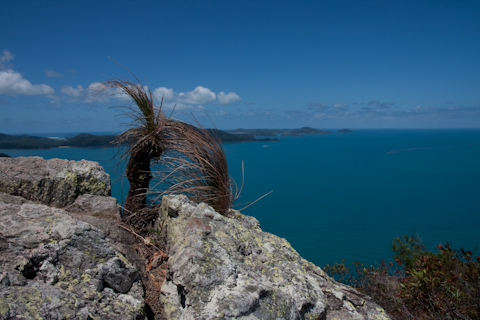 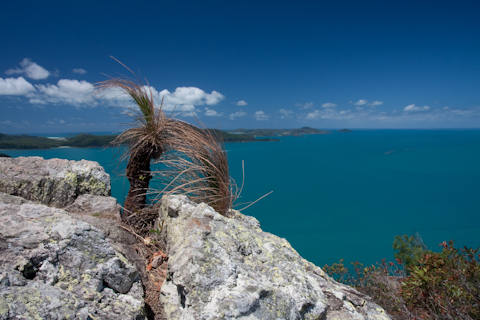 You may have heard that polarized wide angle lenses have a problem with patchy blue colouration across the sky. Hopefully you can now appreciate why this happens. As previously discussed, the polarization of light is greatest at a 90 degree orientation to the sun, and gradually falls off either side. The wide angle lens catches light from a wider arc of the sun, so there will be a greater difference in the quality of polarized light across the scene, as in the next photo which was shot at 10mm. 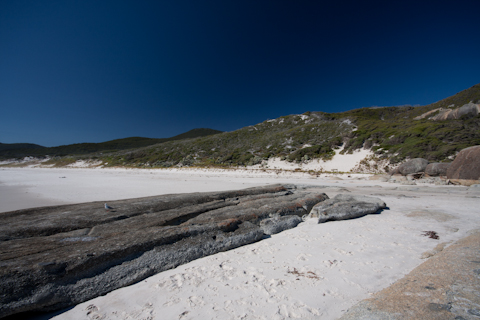 Both linear and circular polarizers exist, which gives rise to confusion about which is appropriate to purchase for photography.

Polarized light as discussed in this article is linearly polarized – the waves of light are all parallel to each other.

The significance of this is related to the autofocus of modern camera bodies.

To take a photo, light from the scene enters the lens and camera body. In the body it needs to go to a couple of different places: 1) The eyepiece so we can actually see what we are taking pictures of, 2) The autofocus mechanism.

The camera uses a beam splitter to direct light to different parts of the camera. This works by polarizing the ray into two axes, and sending them in different directions.

If the light entering at step 1 is linearly polarized, we’ve only got one axis to work with (as the oscillation is 2D), and therefore can only be sent one way – to the eyepiece. In practice this means that your camera’s autofocus will not function, as it is not receiving light.

To get around this limitation, circular polarization is achieved by combining a linear polarizer with a quarter phase wave plate. Without going into too much detail, after polarizing the incoming light, the quarter phase plate slows down one axis (eg. horizontal) relative to the other (eg. vertical). Therefore rather than a simple up-and-down oscillating wave in 2D, the output looks more like a corkscrew (see here for an animation). If we took up our skipping rope again, and spun the free end around in a circle, this is how the light wave would appear.

The corkscrew can be split by the beam splitter (as it is vibrating in 3D), so autofocus will work, but still retains the initial polarizing effect.

Nowadays circular polarizers are more readily available and have no disadvantage other than cost. Linear polarizers are generally cheaper and will still work, but you’ll have to manually focus the scene.

Polarizers are an essential part of the landscape photographer’s kit. While the sky effect may be duplicated somewhat in photoshop, there is no method of digitally removing reflections and revealing underlying detail (not possible as this information isn’t recorded by the sensor). In the foreseeable future, the polarizing filter is here to stay.