I’ve always wanted a 10 stop ND, however the other options were never that viable. Hitech make a slide in 10 stop ND, however users reported a strong magenta cast, as well as patchy exposure due to light leakage between the filter and holder. B+W make a screw-in 10 stop which looked good, but would also be a pain to setup and use with grad NDs.

The filter is made out of glass, and comes in a 4×4″ case. Other than the filter itself, you receive a laminated exposure card, and a leaflet from Lee that explains how to use it. They talk about setting up, exposure, white balance (admit to a colour cast but don’t specify what it is) and noise due to long exposures. They also talk about a couple of problems unique to film including reciprocity failure and the possible need for colour correction filters (although again they don’t really say exactly which ones you need). Issues for the Lee Big Stopper to address would be a) light leakage and b) colour cast.

To start with, the filter comes with a foam gasket on one side. This is designed to bridge the gap between filter and holder when placed in the first filter slot, forming a light seal. I have a Lee holder.

The foam feels reasonably durable, but I can’t really comment on how it will stand up over time, it feels ok.

There looks like a small gap in this photo, however the filter was probably pushed down a little far. The foam gasket does not quite reach all around at the vertical and horizontal points of the holder. The rest of the seal is made with the adapter ring, which sits a tiny bit further back than the holder (less than 1mm). There isn’t a perfect seal with the adapter ring, but the gap is so tiny, and there is a fair length of foam I can’t see this being a problem. 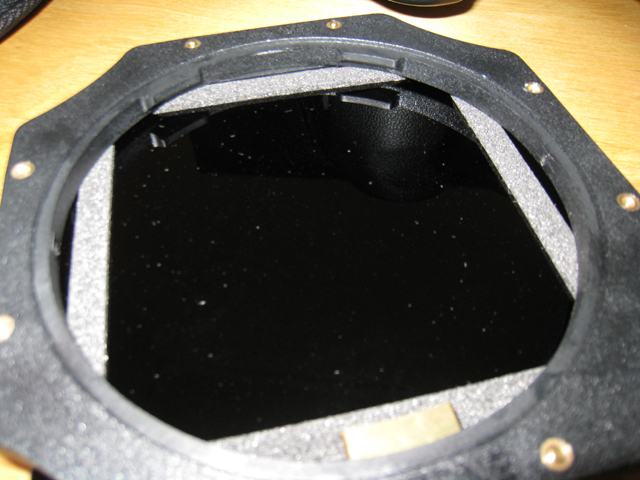 Initial reports have disclosed a cool colour cast, which was the case with my example. AWB should sort most of it out, with the rest correctable in PP. The next two shots were taken with WB set at tungsten. The first had no filter, while the second had the big stopper. There’s a bit of optical vignetting in the second photo, as the shots were taken at f/2.8 and 17mm. For field use you probably need to cover up the eyepiece for a complete light seal, which I didn’t do here.

The glass reportedly contains an infrared filter..the absence of which is the cause of the magenta cast in strong resin NDs such as the hitech, or when stacking weaker ones together.

Cokin Z-pro holder: I’ve never actually held one, but going on pictures I don’t think this filter will be compatible. The slot closest to the lens appears to contain some plastic stubs designed to hold a polarizer, which would interfere with the foam seal. Again I’m not 100% sure about this; whether they can be removed or the holder can be reassembled a different way.